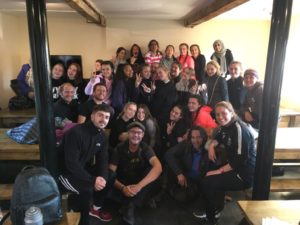 St Hilda’s were the overall champions. They defeated NLA 4-0, Bellerive 1-0, Liverpool College 1-0 and Broadgreen 6-0.  Player of the tournament – Lemara Nolan.

Well done to all the girls who completed this two day course. This will make a big difference to your GCSE practical grade.  Competition champion – Hollie Windrow.

The boys won all their group games but then lost out on penalties to Notre Damme in the semi-finals.

Congratulations to all runners, this was a tough hilly course!

Won 4-1. Man of the match – Jamie Pomford and Alfie Taylor.

The A team won all their games and were the overall champions. The B team won one, drew one and lost one.  Well done to our year 10 boys playing against year 11s from other schools.  Players of the tournament – James Weeks.

The staff and students have been playing every Friday after school. All abilities welcome.  Well done to Rawia Kassim and Alice Hughes for their excellent shooting skills in recent weeks.

Together, we fast – during Lent and Ramadan

These are recommended resources your son or daughter can use to prepare for their GCSE Mathematics: